The shark net was a response to fatal shark attacks on swimmers in Middle Harbour during the early twentieth century. Members of the community urged Mosman Council to provide shark protection measures at Edwards Beach, a popular place for swimming. Some people, though, opposed such measures on aesthetic, hygienic and pragmatic grounds.

After much debate, the steel net enclosure was erected in 1935. It was suspended between steel cables that extended from anchor posts on Rocky Point (often known as ‘The Island’) to a steel tripod tower on a small rocky outcrop at Edwards Beach’s northern end. The net was taken down at the end of each summer.

In 1955 a shark killed a boy who was checking a lobster pot not far outside the net off Wy-ar-gine Point.

Mosman Council removed the net in 2008 on the grounds that it was very costly to maintain and there had been no shark attacks in the vicinity since 1955. There were widespread protests against the decision that highlighted the net’s heritage significance and the protection it still provided for swimmers.

All that remained of the net in 2014 were the anchor posts and a segment of the steel cables at Rocky Point, and two concrete foundation blocks that supported the tripod tower close to the beach. There was also an interpretation sign on Rocky Point. 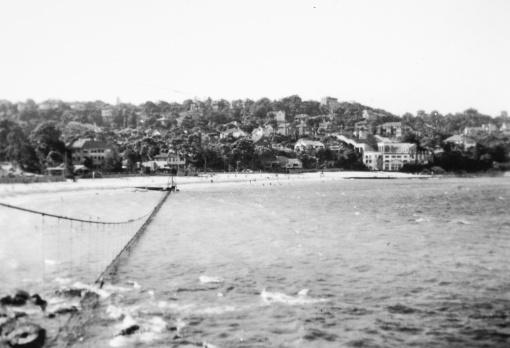