Dr Alfred Edmund Finckh (1866-1961), a prominent pathologist and fencing maitre d’armes, designed and built Myarock in 1917 as a family home. His wife was Melissa Dorcas Finckh, nee Slade. He specialised in growing Australian native plants in the spacious garden, which visitors from the Naturalists Society of New South Wales in 1933 described as possessing an ‘enveloping atmosphere of peace and beauty’ with a ‘velvety lawn’. The original house was probably part one-storey and part two-storey with a wide verandah. It had sweeping views of Sydney Harbour and the Heads.

Finckh and, after his death, his daughter Dr Dorrie Alfreda Holt owned Myarock. New owners from 1994 added an upper storey within the roof space and lattice work was removed from the verandah.

By the early twenty first century Myarock was widely regarded as one of Mosman’s most attractive homes. Both it and its garden appeared to be in excellent condition. The owners in 2011 were Patrick Allaway, the chairman of Saltbush Capital Markets, and his wife Libby Allaway.

Following a new owner’s purchase of the house, a development application was submitted in late 2011 for its demolition and replacement with a new home. Myarock was then described a ‘part two, part three-storey brick and timber dwelling with a pitched slate tiled roof’ on a block of 1,680 square metres. Although Mosman Council was asked to consider assessing Myarock’s heritage significance before any decision was made, the development application was approved and demolition went ahead in 2012. 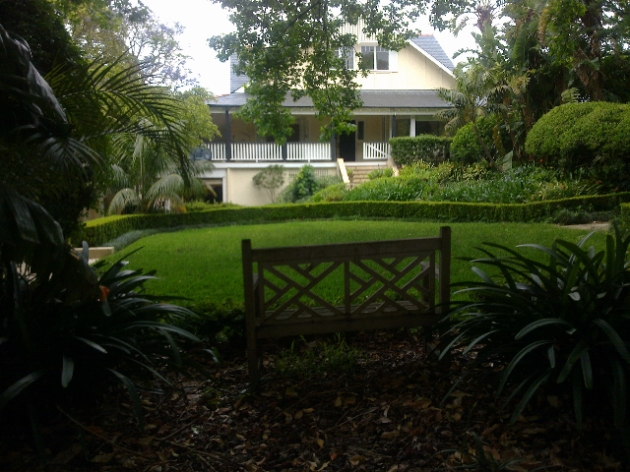 In 1914 Miss Leila Logan established Lillingstone School in her house at 57 Muston Street, Mosman. There was a timber school hall in the back garden. The 1st Mosman Guides (the first such group in Australia) were in 1923 given a portion of Rawson Park for their outdoor activities. To celebrate they planted two palms close to Middle Head Road. The Guides continued to meet at Lillingstone School Hall, until 1933 when they set up their own clubrooms at 14 Bond Street. At this time 2nd Mosman Scouts took over the land at Middle Head.

The Lillingstone School closed in 1933 and the following year the hall was sold to 2nd Mosman Scouts and relocated to their clubhouse at Middle Head. Later taken over by 5th Mosman Scouts, the clubhouse was for many years the headquarters of the scouts, cubs and rovers, plus 1st Cremorne Guides (later named 1st Middle Head Guides) and two Brownie packs. The hall was altered several times during this period.

By 2005 the hall had been abandoned by the scouts and guides and the building was neglected, vandalised and dilapidated. 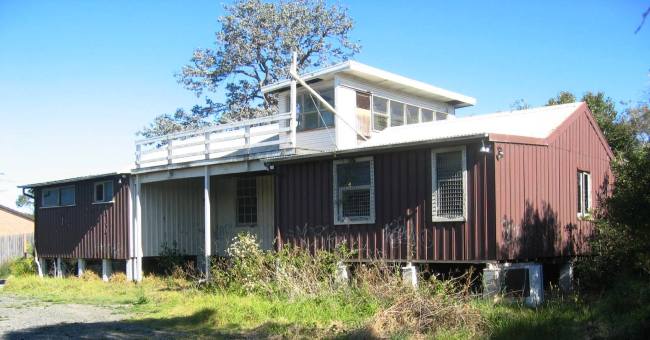 The clubhouse was demolished in January 2006 as part of the redevelopment of the Markham Close housing estate. One of the palms planted by the guides is still visible in the Middle Head Road front garden of the new house built on the site.

(Exact dates will be included once further research is undertaken.)

The house was built on a bush block in approximately 1953 for a Mr and Mrs Christie.

For many years from the mid 1950s it was the home of Ronald (known as Stock) Stockwell, a Unilever executive, and his family. A keen gardener, he was also an expert handyman and carefully maintained the property. Stockwell died in 2007. Mosman Council approved demolition of the house and erection of a new one in the same year.

The house included an internal staircase and a laundry and a workshop in the basement. Downstairs there were a kitchen, dining room, living room, study, hallway and toilet. Upstairs were a hallway, three bedrooms, a bathroom and a sun room. The section of the garden overlooking the harbour was often used for barbecues. Rooms on the harbour side had superb views. The design was quite typical of residences erected in affluent Australian suburbs during the 1950s. The house was easily seen from the street, unlike the one that replaced it, which was mostly well hidden except for its large garage. 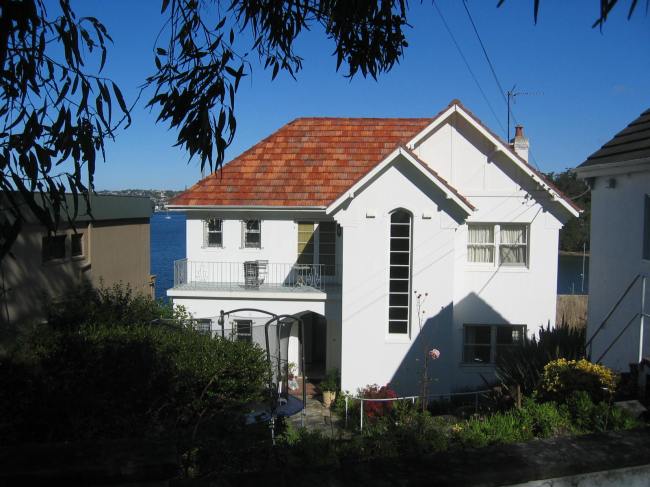 ‘Built in 1844 by John Frederick Hilly, architect, for Oswald Bloxsome, the house was purchased by a syndicate in 1885 and its grounds partially subdivided. The house, located near Spofforth Street between Rangers Avenue and Brierly Street survived until 1912’ [now known to be 1914] ‘when, despite protests by the local community, it was demolished for further residential subdivision’.