Trafalgar in c1910 (Our Beautiful Homes)

In 1908 William Wells Robinson, and his wife Charlotte, built a large Federation mansion at 68 Bradleys Head Road (previously known as No 52), on the corner of Queen Street. Married in 1883, they and their children previously lived in a home named Trafalgar in Singleton, so named because William’s grandfather fought at the Battle of Trafalgar. They also gave the same name to their new residence in Mosman. Unfortunately Charlotte died the following year; however William and his second wife Mary lived in the house for many years until his death in 1947, aged 89. It was advertised as ‘a Gentleman’s residence of brick’ in 1939 but apparently not sold. His daughter Myra was also living with him in the 1940s. Frank Robinson was his other child. Mosman Council assessment notices have Mrs Joan Chapman as a new owner in 1949.

William was admitted as a solicitor in 1883 and became a partner in the Singleton firm owned by Sir Albert J Gould. He was known locally as a philanthropist and was one of the partners (and the solicitor) in the Cobar Syndicate which took over the Singleton copper mines. After his move to Sydney in 1908 he continued to practice as a solicitor and held directorships with the Victoria Park Racecourse and Australian Woollen Mills Ltd.

In early 1956, Trafalgar was converted to flats by the architect, A Ashton of 27 Hopetoun Avenue, Mosman.

An application to Mosman Council in February 1962 sought to build a ‘car service station’ on the site. This was refused. The following month an application was lodged for the building to become a private convalescent hospital – this was also refused. Then in November 1962 approval was given for a three-storey block of 18 flats on the site and Trafalgar was demolished.

Soon after Trafalgar was completed the house was featured in Our Beautiful Homes, a c1910 book with photographs of what were considered to be Sydney’s best mansions in the new Edwardian style. The publisher sought to ‘provide our fellow subjects of Greater [sic] Britain with the opportunity of seeing something of the conditions under which we live, and of the ideals of House and Home which inspire us in New South Wales’ (p 13). Most of the pictured mansions were ‘the realisation of self-made wealth’ with barristers, solicitors and politicians well represented.

So why would such a building be demolished less than 55 years later? A clue to prevailing attitudes towards Federation buildings in the 1960s is provided in the new introduction to a 1977 reprint of Our Beautiful Homes. The author noted that Georgian and Victorian buildings in Sydney were starting to be revered, however he could see no possibility that Edwardian buildings such as were photographed for the book would ever be similarly valued. He condemned most of the architecture in the book as being a ‘mess of bits and pieces’ and ‘architectural humiliations’ (p 5).

One might argue today that being replaced by a bland 1960s block of flats was the ultimate humiliation for Trafalgar. 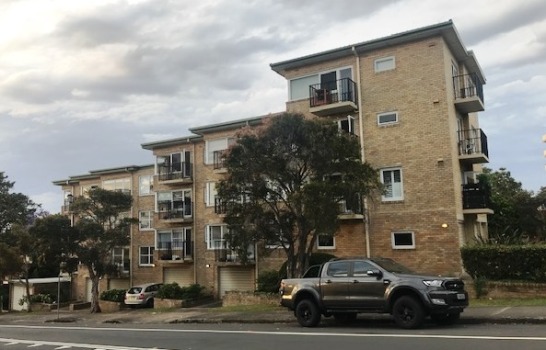